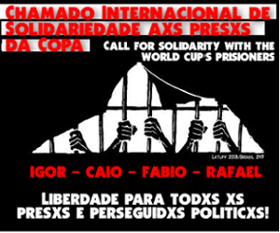 On July 12, the day before the World Cup final match, the Police of Rio de Janeiro arrested 19 activists, aiming at disintegrating the big protest scheduled for the final’s day, on the grounds that they would have taken part in “violent” acts in riots last year and they would be planning other actions in the final manifestation of the World Cup. In total 23 search warrants and arrest and temporary detention were met against people accused of participating in social movements, the mandates were 5 days of probation, four people managed to escape the police kidnapping.

The activists were taken to the City of Police in Rio de Janeiro, a large complex of police departments built to take care of the repression of the people challenging the mega-events and the logic of the market town. In this large complex is the DRCI, Bureau of Suppression of Computer crimes, which currently plays the role of the historic Precinct of Political and Social Order, the infamous DOPS created in 1924 to suppress the anarchists, mainly used during the Vargas era and later Military regime in 1964, in order to control and repress political and social movements opposed to the regime in power. The kidnapped activists were all sent to the prison complex of Bangu.

A few days later they were granted a release order that freed 18 activists who were arrestes. Soon after, justice decreed again the arrest of these 18 people, which, however, escaped and remained underground. Camila, Igor Pereira and Elisa (Tinkerbell) continued arrested for around 10 more days, when he was granted bail to all, except for Caio Silva and Fabio Fox, arrested in January this year accused of murder. The activists go through a difficult time of criminalization and persecution, even awaiting trial in freedom, they can not leave the city or participate in demonstrations and public gatherings. This December, Igor Mendes was arrested again and 2 more activists went underground, accused of not complying with the court order and have participated in a peaceful public event last October 15, representing, according to justice, a threat to public order. More arrests may arise at any time and the trials that take place over the next few months can still get them to condemnation. Police said the arrests are based on research that has taken place in camera proceeding since September 2013 against the Popular Independent Front (FIP), black blocs and other activist groups, with conspiracy charges. The police methodology is monitoring, and the breach of confidentiality and privacy of individuals. The 23 militants are indicted by an extensive and absurd list of offenses ranging from armed gang until possesion of explosive, depredation of public and private property, endurance and injury, and corruption of minors.

The State that made more prisoners in Rio because of a football match is the same state that closes schools, which kills in the “favelas” and that made the World Cup. With these arrests the Brazilian State wrote another page in its history, it was the day when all masks have fallen, not only the state but also of political parties and groups who want it as it is, that take part in this so called democracy, this so called parliamentary representation. On this day the state said in so many words “WAR AGAINST THE PEOPLE”, not in a subliminal way, but to anyone who would listen. In the slums we already know that long ago, the marches of June / July 2013 also tried to warn, but this time it was in prime time and with all the letters. Where the population saw that the same State that creates the laws, breaks them when it pleases, and always made poor and black population throughout the genocidal history of the Brazilian state.

We Invite all to organize actions in solidarity with the World Cup prisoners. We can not remain silent before the state terrorism of the Brazilian government and FIFA dictatorship. Everyone knows the importance of mass riots that occurred in Brazil since June 2013 until now, they have been a milestone in the history of this people, a moment of rupture with the existing structures, a shout against various oppressions and historical violences against the people . Repression forces want at all costs to contain the indignation of the population frightening activists through persecution, want to regain control and conform people to return to the misery of everyday life and they are willing to arrest all of tose who do not retreat in this fight. Our friends need all the support to win this battle and stay in the streets, in the assemblies and popular mobilization.

No step back! No one is left behind! For the immediate end to the persecution!